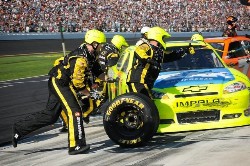 Goodyear Builds on Legacy of Innovation, Superior Performance in 2014

AKRON, Ohio, February 13, 2014 – Not many companies can claim as long and storied a history in American motorsports as The Goodyear Tyre & Rubber Company. This year, Goodyear celebrates its 60th anniversary as a key supplier to America’s most popular motorsport – NASCAR, making it not only one of the longest-running supplier relationships in racing, but in all of sports history.

“All of us at Goodyear are extremely proud to celebrate 60 consecutive years of supplying race tyres to NASCAR and its drivers,” said Stu Grant, general manager of global race tyres. “Since 1954 our involvement in NASCAR has been a proving ground for tyre development, helping Goodyear provide superior performance and innovation both on and off the track.”

Much like the cars of NASCAR have evolved over the decades, today’s Goodyear Eagle race tyres bear little resemblance to the standard auto and police tyres used in the early 1950s. Goodyear’s dedication to tyre performance led to purpose-built treaded bias race tyres in 1957, to slick bias race tyres in 1974, to the first radial racing tyres in 1988, and just last year to the introduction of race tyres using Goodyear’s exclusive Multi-Zone Tread Technology.

“The evolution of our NASCAR racing tyres has been a very exciting and rewarding project,” said Grant. “We are looking forward to the next 60 years.”

Goodyear’s 2013 racing season was highlighted by the rollout of the tyremaker’s latest innovation, Multi-Zone Tread Technology. Featuring two distinct tread compounds in a single right-side tyre, the concept was inspired by similar innovations in a Goodyear passenger tyre – the Assurance TripleTred All-Season. However, the new race tyre quickly established itself on its own merits.

“One of the most exciting developments in recent years was the introduction of Multi-Zone Tread tyres in 2013,” said Grant. “First raced at Atlanta, it’s a concept with enormous potential. Based on the success we experienced, we’re investing capital in our manufacturing process to expand the use of Multi-Zone Tread in 2014 and beyond.”

Goodyear is one of the world’s largest tyre companies. It employs approximately 69,000 people and manufactures its products in 52 facilities in 22 countries around the world.  Its two Innovation Centers in Akron, Ohio and Colmar-Berg, Luxembourg strive to develop state-of-the-art products and services that set the technology and performance standard for the industry. For more information about Goodyear or its products, go to www.goodyear.com.