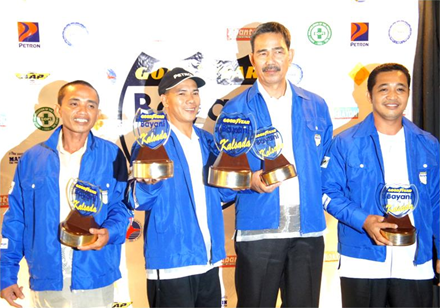 “Each of the 2013 Bayani ng Kalsada finalists is a true hero, and their efforts to help others should be applauded,” said Goodyear Philippines Managing Director Ron Castro.

“Safety is a core value of Goodyear and at the heart of everything we do, so we are proud to help recognize these individuals publicly for their selfless acts in helping keep others safe on the road.

“Bayani ng Kalsada is one way that Goodyear, along with our valued partners in the program, is highlighting the importance of road safety and that it is everyone’s responsibility.”

From Public Utility Vehicles Drivers to Heroes of the Road

The 2012-2013 Bayani Ng Kalsada winners are brave and selfless public transportation drivers who went beyond just safely getting passengers to their destinations.

National winner and Visayas Regional Champion Christopher Fonclara rushed four wounded victims of a collision between a truck and tricycle on an Iloilo City thoroughfare to the nearest hospital in his tricycle one victim at a time, beginning with the most seriously wounded. Two of the victims survived thanks to his efforts.

Taxi driver Glenn Arcillia, Regional Champion for Luzon assisted a couple who were shot by two men on a motorcycle, rushing them to Medical City in Metro Manila. The wife survived the shooting as a result of Arcilla’s assistance. Unfortunately, her husband was declared dead on arrival.

NCR winner Rolando Carullo was driving his jeepney along the service road when he came across a child gasping for breath by the roadside. He politely asked his passengers to give way to the child and his parent as he rushed them to the Taguig Pateros Hospital without asking for payment.

Jeepney driver Roel Limen, Mindanao Regional Champion, drove a woman who was having a heart attack to the emergency room of the General Hospital in Zambowood, Zamboanga City, and waited to drive her home once she was released.

Dr. Lorraine Marie Badoy of Metro Manila was also recognized with a ‘special award’ for assisting a stranger who was having a heart attack by rushing him to the Makati Medical Center emergency room in Makati City where he was given immediate attention. Unfortunately, the victim did not survive his massive heart attack.