‘Wingfoot One’ Ushers in New Era of Goodyear Blimps 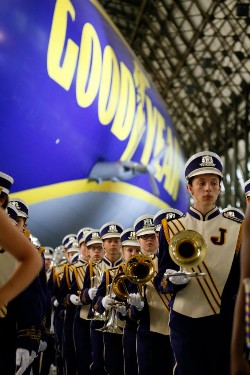 Roberts, also a long-time ESPN sportscaster and author, christened the new airship with the traditional breaking of a bottle against the ship’s gondola before an audience of more than 2,000 people at Goodyear’s Wingfoot Lake Hangar in nearby Suffield, Ohio.

“The christening of Wingfoot One begins a new chapter for the Goodyear blimp, one of the world’s most recognizable and enduring brand icons,” said Richard J. Kramer, Goodyear chairman and chief executive officer.  “The new blimp renews our commitment to our airship program, builds on our legacy as the leading operator of airships and continues our leadership in providing superior aerial coverage of the most watched news, sports and entertainment events.

”Following the ceremony, Roberts boarded Wingfoot One for its ceremonial first flight.  She joins a list of accomplished women who have christened Goodyear blimps, including astronaut Sally Ride (2000) and aviation pioneer Amelia Earhart (1929).

“In 1918, my great-grandfather was recruited by Goodyear and moved his family to Akron for a better life. A number of other relatives have worked there too,” said Roberts.  “I don’t think my great-grandfather could have imagined that one of his descendants would be asked to christen the Goodyear blimp.  I’m so honored.

”Roberts has a deep connection to Goodyear and Akron.  Her mother was born in Akron and graduated from East High School – a few blocks from Goodyear’s headquarters.

The name Wingfoot One was selected from nearly 15,000 entries in an on-line public voting contest.  It was submitted by Akron resident Charlotte White who will receive a day of activities with Wingfoot One as her prize.

Wingfoot One is the first of a new generation of airships manufactured by Germany’s ZLT Zeppelin Luftschifftechnik and assembled by a team of Zeppelin and Goodyear engineers over the past 12 months.  It represents the first major structural design change of a Goodyear airship in nearly 70 years. The new blimp features advanced on-board avionics and flight control systems with the capability to travel at faster speeds and hover in place.  The spacious passenger gondola will provide an enhanced in-flight experience with sweeping, panoramic windows.

Goodyear will introduce two additional blimps to the skies over the next four years as it phases out its two remaining GZ-20 models based in Pompano Beach, Fla. and Carson, Calif.

Since 1917, Goodyear has built more than 300 lighter-than-air vehicles for public relations and defense applications, many built at the Wingfoot Lake facility.

Goodyear is one of the world’s largest tyre companies. It employs approximately 69,000 people and manufactures its products in 50 facilities in 22 countries around the world. Its two Innovation Centers in Akron, Ohio and Colmar-Berg, Luxembourg strive to develop state-of-the-art products and services that set the technology and performance standard for the industry. For more information about Goodyear and its products, go to www.goodyear.com/corporate.